You probably don't have much time to read a three page film review and you probably want the basics. We'll make it quick and easy to save you time. This is the A Ghost Story movie review. 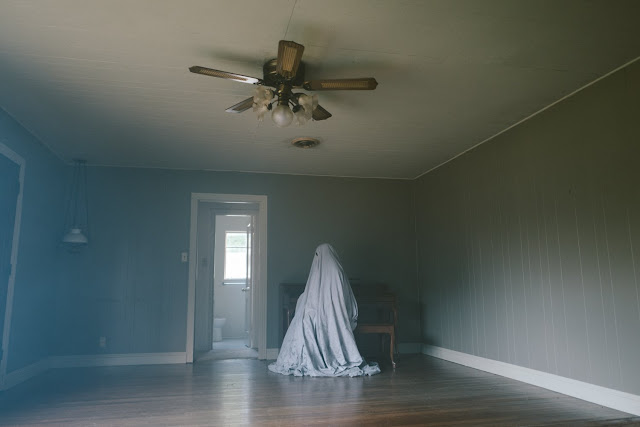 One of the gems to come out of cinema this year, A Ghost Story is a story about a man (Casey Affleck) who dies and comes back as a ghost under a white sheet. He watches as his love (Rooney Mara) moves out  and an assortment of different people move in through the years.

A Ghost Story is for the true cineaste. Long takes haunt the beginning of the film; lasting minutes. There's an entire five minutes dedicated to Mara eating a pie. Director David Lowery allows the audience to watch all the emotional changes on Mara's face, as a white sheet stands off to the side. Affleck is hidden under the white sheet the majority of the film, but still reflects someone, or something, that is saddened by the outcomes of life. Who would want to live in a house for decades only to watch each family move in and out? Affleck's character, simply named C, is stuck for an eternity in his house. A point the literal film reflects: Being shot on a boxy aspect ratio of 1:33:1.


The film will make you think about a great many things. Time and catharsis are the two larger ideas at play. Mara eating a pie for five minutes, a lengthy conversation about the end of the world, Affleck's C staring through windows for long periods of time. Lowery and cinematographer Andrew Droz Palermo make use of as much white space as possible, so the eye is affixed to only a few things in each shot. A Ghost Story is a carefully constructed tale that goes beyond modern cinema.

Critic and the Fan is still exploring different layouts for the site, along with different articles. While we are focusing on better improving the site, we hope to keep our viewers happy. If there are any other articles you'd like to see, please leave a comment. Thank you.
| 5:10 PM
Email ThisBlogThis!Share to TwitterShare to FacebookShare to Pinterest