The Untouchables is a tussling, manly movie based on fictitious events of the conviction of Al Capone. With all the shootouts, classy gangsters, and the action cops, the cheesy music and goofy puns still lets you know that it’s an 80’s film.  Either way, it is still entertaining with this star-studded cast as well as the “justice-is-served” plot. 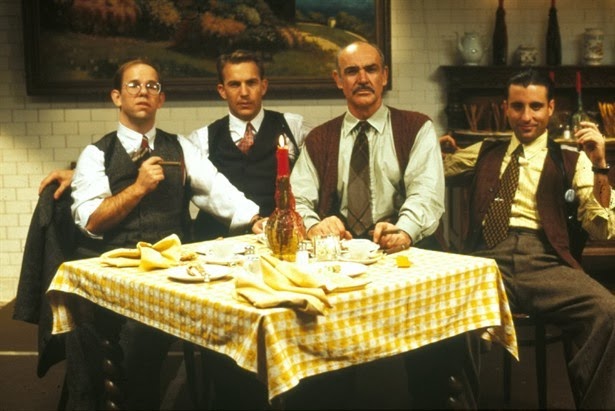 Eliot Ness (Kevin Costner) is a Treasury Department agent brought into the Chicago force after a controversy due to gang violence and bootlegging led by infamous Al Capone (Robert De Niro).  Ness intends to catch Capone after years of Capone-rule Chicago.  After a failed attempt at finding prohibitionists with multiple officers, Ness meets Jimmy Malone (Sean Connery) by chance.  This rugged Irish officer soon becomes a sort of mentor to Ness.  Alongside the two, they also have Agent George Stone (Andy Garcia) who is the sharp shooter with a level head and Agent Oscar Wallace (Charles Martin Smith), a brilliant accountant from Washington.  This team is nicknamed “The Untouchables” because of how superior they have become. There are historical insignificance's to the film, but the story intrigues and the characters' back and forth with one another is reason enough to stick around.

The plot evolves as the team works relentlessly to catch Capone in the act or find some affiliation to bootlegging with his name attached.  Meanwhile, Capone laughs off the team’s attempts but still keeps himself safe above anything else. Action scenes are engaging, bringing an 80’s spin on writing. The silly puns at the end of each scene leaves us with a satisfying chuckle.  The smooth jazzy cop music (you know the type, something synth-filled) definitely screams old school, cheesy, and part of the 80's era of film-making.  But despite the corniness the 80’s produced, Connery’s performance keeps the audience engaged for good reason, with his famous quote “You wanna know how to get Capone? They pull a knife, you pull a gun. He sends one of yours to the hospital, you send one of his to the morgue. THAT’S the CHICAGO way!” Connery brings enough depth and acting prowess to garner him a Best Actor in a Supporting role win. While, De Niro and Costner go head to head with great talent. 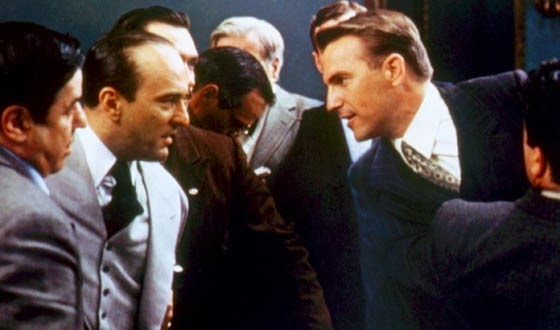 The Untouchables is classical despite the fact that it is not even historically correct.  All performances were point on with clever dialogue and a smooth flow from scene to scene.  This film is timeless and always good to watch when you’re in the mood for cops and robbers.

| 8:17 AM
Email ThisBlogThis!Share to TwitterShare to FacebookShare to Pinterest