The Dark Tower comes out this weekend and may prove to be Stephen King's hardest novel to adapt. The film needed four writers to transfer the lengthy book to screen; but one of the writers, Akiva Goldsman, has a few films that shouldn't have existed in the first place. 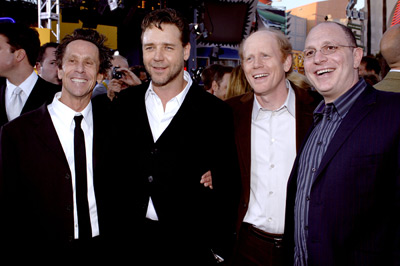 Writer of the critically hated The Da Vinci Code, Goldsman decided to bring his absent writing skills back for a sequel in Angels & Demons. The series was already at an all time high after only one film. The peak had been passed and it was downhill from here. Angels & Demons offered plenty of awesome concepts to delve into, but Goldsman couldn't find a good balance of adventure and mystery. The film grossed nearly $300 million less than it's predecessor and went on to receive a 37% score on Rotten Tomatoes.

Many films on this list are proof that Goldsman doesn't really care about the films he writes. As long as studios are paying him money he'll write anything. In comes Lost in Space. The film was Goldsman's sixth film as writer and first as producer. Adapted from the Lost in Space television series, a family travels through space to find a new home. The film had so much going for it including all star power in Matt LeBlanc (this was the nineties). The fault was on Goldsman who couldn't navigate the complexities of seriousness and comedy. Critics awarded the film 27% on Rotten Tomatoes.

Goldsman may not have been the one to sink this Shailene Woodley led YA franchise, but he definitely didn't help fix it. Based on the books The Divergent Series, this second film in the series follows a female named Tris (Woodley) who is hunted by the superior Erudite elite. With a release of 2015, all had been done in the young adult film realm by now that Insurgent felt like another run-of-the-mill cash grab from some money hungry studio. That studio was Lionsgate, famous for it's Twilight and Hunger Games franchises. Both had gone onto to financial success. Insurgent lacked originality which drew the franchise closer to complete destruction. Insurgent received 29% from Rotten Tomatoes critics.

The story sounds cool on paper: A wave of alien invasions that keeps endangering humanity's survival. The problem wasn't just the special effects and acting, but also the story. Released in 2016, after the dizzy spell of nearly half a decade of young adult films, The 5th Wave tried capitalizing on a downward spiraling trend. The film, based on a young adult novel, could have gone somewhere beyond the expectations of its audience. Instead, writer Goldsman and two others (Susannah Grant, and Jeff Pinkner) laid out their clear plans on paper to keep the film as YA as possible. This included teen partying and a slight romance that had no place being in an alien invasion film. At the end of its release The 5th Wave received a whopping 16% on Rotten Tomatoes.

Usually rated as one of the worst films ever made, Goldsman had the pleasure to write this script all by himself. Goldsman had worked on Batman Forever with director Joel Schumacher and the duo had decided to team up again for another outing. This time around bat nipples and unwanted one-liners were the motto for the film. Goldsman and Schumacher turned complex characters like Bane, into machismo simple-minded chemical experiments. Batman was a shell of a comic book hero and so was the forced entry of Batgirl. Strangely enough someone decided to like the film, with a 10% Rotten Tomatoes score.

Thanks for your support in reading this article. Please check out our other articles at Critic and the Fan and don't forget to subscribe for more.
| 10:00 AM
Email ThisBlogThis!Share to TwitterShare to FacebookShare to Pinterest