What Could Make The Secret Life of Walter Mitty Better 
Just like the comedy, the dialogue is stale. Sean Penn is given the best lines and the script fights to bring out jokes when there are barely any to bring out. The first half of the film is wrapped up in daydreaming and wishing for adventure, while the second half of the film is an adventure. Sadly, the two halves don't combine well. The second half is faster while the first half is slow. The daydream sequences slow the film down and you want them to end before they begin. They're sporadic. It would have been okay to keep the daydream sequences if they were in the entire film. The dialogue could have been better with subtle character changes. Put less effort into many of the genres. Adventure comedy! Fantasy adventure! Comedy! The drama didn't work so well with the story Stiller and Co. were trying to tell. If you take out some of the genres, the story will flow a lot better. Again, dialogue can be king when used properly. Just look at Scorsese, Tarantino, Coppola (both Francis Ford and Sophia). 2.  No daydreams or daydream sequences.


I've never met or seen someone who has zoned out that much for that long. Walter Mitty has to have a disorder or something. He should go to the doctor. Plus, these daydreams are pretty bad. There's about three or four daydreams and they're all about Walter Mitty and his love, who's played by Kristen Wiig. He's always saving her from a fictitious gas leak, or as a different character like her Spanish mountain climbing lover. They're all over the place and don't mesh well with the current story. I daydreamed like this when I was a kid. Now, usually I don't day dream this fantastically about a woman or my life. It's the usual, being rich, love, traveling. We can face the fact that Mitty doesn't like the man he is, so he dreams. Then keep the daydreaming consistent or have Mitty talk about these daydreams. They always feel out of place. Throw them away! Get them outta here! Focus on the characters and you'll tell a great story. Again, dialogue can be king when used properly. We don't NEED to see his daydreams.

3.  Keep to one story and cut down the genres.

This film was at some point a drama, a comedy, a fantasy film, and an adventure film. Then, they were spliced all together and became one big mess of a film. Usually comedy comes with adventure, so we could have taken out the fantasy and drama concepts and made this film a full fledged adventure. Then the dialogue wouldn't have to be amazing and the audience would receive nice gags, like Mitty being smacked with the branches while journeying to find Shaun O'Connell or the drunker sequence with the helicopter. I enjoyed those scenes very much. Let's cut the genres and keep the adventure. The dialogue is mostly stale and can be overlooked if it's a good adventure film, just look at Indiana Jones and the Last Crusade. 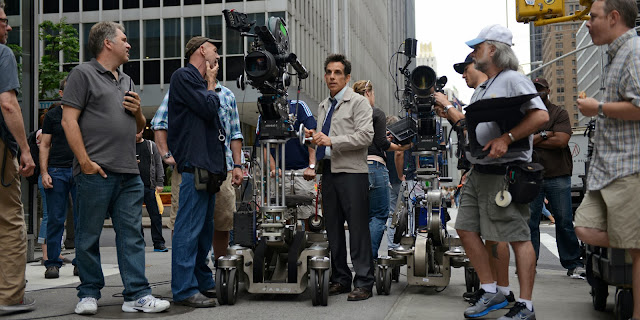 So, that's it. Any questions? If you don't agree, I dare you to bring a good argument to the table.

| 4:32 PM
Email ThisBlogThis!Share to TwitterShare to FacebookShare to Pinterest