American Hustle keeps the story flowing with phenomenal acting and dialogue that beautifully rolls off the page, but as the film progresses it feels like a knock off Scorsese gangster flick with no legs to stand. 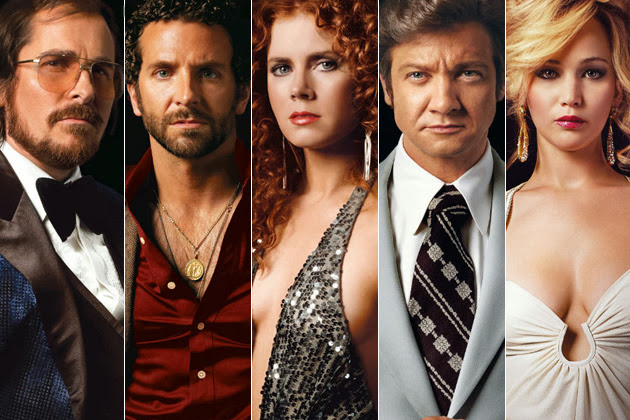 This film is Martin Scorsese's Goodfellas flipped backwards. The characteristics are all there, but it's a lighter film that brings laughs in every scene. The audience gets to watch these characters crack and thrive for something they'll never achieve. Each character wants the American Dream of fame, fortune, and power. Each character receives that dream for a split second then it's gone. A great study on the greed and lust of the American person. Every actor plays their part like the Academy Award winning/nominated actors they are. Bale, again, gains the weight of a middle-aged man who's so used to having it easy that there's no need for him to look good. He brings pizzazz to the comb-over and beer belly. Adams plays his mistress with such grace, grit, and glamour that you can't help but stare at her for two hours. Bradley Cooper shows that he has acting ability, becoming a complex bastard agent who you want to feel sorry for. Jennifer Lawrence is surprisingly good in this film. I was curious why she acted so horrible in Hunger Games: Catching Fire and it's because all her acting was exhausted in this film. Renner brings a down to Earth charm that the other characters don't display. Flashy costumes and amazing set designs make for fabulous scenes with a brightness that gives the film a surprising glow. You'll walk out remembering the vibrant colors of the marble counter-tops, the yellow wallpaper and the glitzy dresses. David O. Russell shows his directing ability, telling a complex over-the-top con story, but his efforts are lost in a sea of Martin Scorsese-esque camera work and dialogue. From the voice over to the back stories of characters, I feel like Joe Pesci should be popping up any moment to whack someone. The plot builds up too much for itself then ends without wrapping up every character arc. The first third of the film has poor pacing issues with the film beginning in the middle of the story, then jumping back to give the audience back stories on the characters. In less fashionable style, the cinematography is wondrous, but camera work becomes dull with the same close up shots on every character.

American Hustle might be a beautiful interpretation of the American Dream in the 1970's, with a great cast and dialogue, but becomes a shoddy wannabe Martin Scorsese film that never reaches that level of greatness.

B+
Good Qualities:  Great cast, great dialogue, good story.
Bad Qualities:  Pacing issues, too similar and not as good as Martin Scorsese's films.
| 8:55 AM
Email ThisBlogThis!Share to TwitterShare to FacebookShare to Pinterest