"Trumbo" has a great lead in Bryan Cranston, but the film is monotonous and uneven. 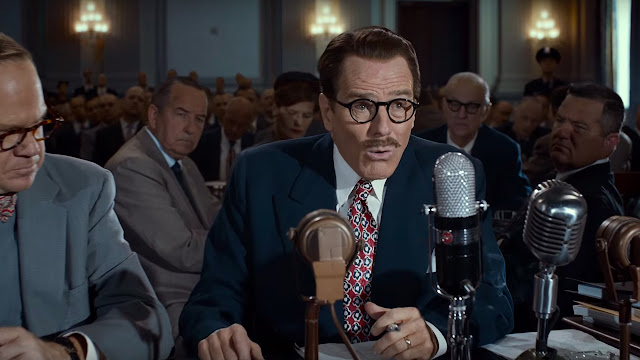 Every year Hollywood comes out with a film that glorifies itself. This year the film is "Trumbo" and Hollywood has a funny sense of saying sorry. In 1947, Hollywood decided to make political changes and blacklist anyone who supported Communist propaganda. One of those people was screenwriter Dalton Trumbo (Bryan Cranston).

The film never feels complete. There is a moment when Trumbo says that if every scene was great the film would be monotonous. This moment captures "Trumbo" perfectly. Each scene is perfectly written, perfectly shot and beautiful in every aspect, but altogether the film is a bore. Trumbo's life is filled with many memorable moments for the audience to indulge in. Yet, these moments can never come together in a satisfying way.


The best parts of "Trumbo" are in the third act when Trumbo starts secretly writing screenplays. A film about Hollywood that rarely features Hollywood is quite the oddity, especially in a film that features one of the greatest screenwriters of all time. The third act is the most comprehensible in terms of fluidity and cinematic beauty. The first two-thirds of the film seem to wander around in a wasteland of low-grade forgettable costumes and period-sets, before the third act settles on a period that helps represent the mood of "Trumbo."

"Trumbo" is a vehicle for Cranston and only him. All other cast members are there to fuel Cranston with the energy to deliver Shakespearean crafted dialogue. The film's representation of Trumbo's life creates a rotating door of characters that come and go at the whim of the story. Barely a handful of these characters are memorable, with the rest of the cast sticking in your head because of previous film knowledge or nostalgia.

| 10:16 AM
Email ThisBlogThis!Share to TwitterShare to FacebookShare to Pinterest