"Star Wars: The Force Awakens" has noticeable flaws, but does not disappoint, living up to all the hype. [Spoiler Free] 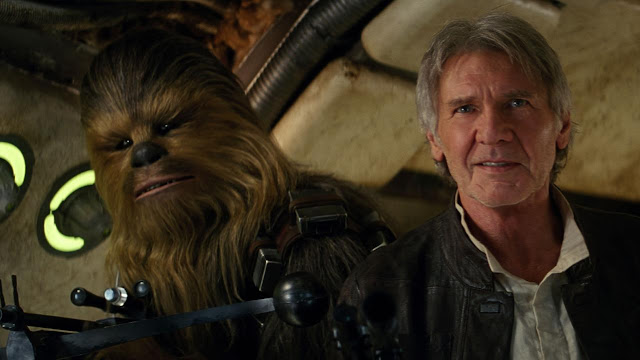 Arguably one of the largest pop culture moments in history, "Star Wars: The Force Awakens" is finally here and has the generic problems of a film that must continue a franchise with new characters and new worlds while maintaining canon. This latest outing introduces Rey (Daisy Ridley), a lonely scavenger, and Finn (John Boyega), an emotionally damaged stormtrooper, who must take on the evil First Order, commanded by Kylo Ren (Adam Driver).

It's very hard to convey the astonishing feat that Disney has accomplished without spoiling the film for audiences. I personally love the film, even with the amount of flaws it has. However, these flaws are due to the difficulty of constructing a new trilogy and the pressure that is created when trying to please 40 years of fans and studio executives. Most of these flaws have to do with the choppy flow of the story and overcrowding of characters.

The first problem with the film is overcrowding of information and characters. Through the ingenious visual effects and lovable characters, most of the film is based on exposition. The flow of character introductions is missing entirely and too many unnecessary characters are brought onscreen. Audiences are introduced to five new lead characters within the first five minutes. The plus side is that director J.J. Abrams knows how to create miniature character moments within these short windows of time, and over the course of two hours these characters become more fully developed. However the crowding and quick introductions to every important character is rushed and out of place. This is followed by inconsistent editing to bring more and more exposition. Abrams tries his very best to balance equal screen-time for main leads Rey and Finn, but never really finds the right fit between the two until the third act of the film.

On a much larger note, it is sad that Abrams got to the "Star Trek" franchise before this film. While each shot is beautiful and has a Star Wars-feel, there are times that "The Force Awakens" has a "Star Trek" vibe. These moments are mostly in the dark and gritty cinematography of some scenes. If it were not for the lightsabers and Harrison Ford, I wouldn't know the difference between either science fiction franchise in this film. This doesn't mean that there aren't memorable Star Wars-moments or iconic scenes, but the operatic quality and consistent iconic creationism is missing. Abrams creates a film that is more like stone skipping. Each scene is there for characters and audiences to get to a bigger picture later down the road. Again, not a bad thing since this film does deliver on many levels. This is just what happens when continuing a franchise and having the inevitable need to bring in new characters.

The film finds its comfort and identity in the third act of the film when it becomes an emotional firestorm. At this point all the characters have been introduced and all the dots have been connected. Abrams doesn't falter to take big steps with rewarding outcomes that leave you emotionally unhinged in disbelief, sadness, and then joy. The film ends on one of the best final shots in the Star Wars franchise. Once the closing credits appear on the screen there is no doubt that Disney has accomplished the remarkable in bringing back "Star Wars."

| 10:42 AM
Email ThisBlogThis!Share to TwitterShare to FacebookShare to Pinterest