Tom Cruise is notably old, but unbelievably energetic in this enjoyable continuation of the Mission Impossible franchise. 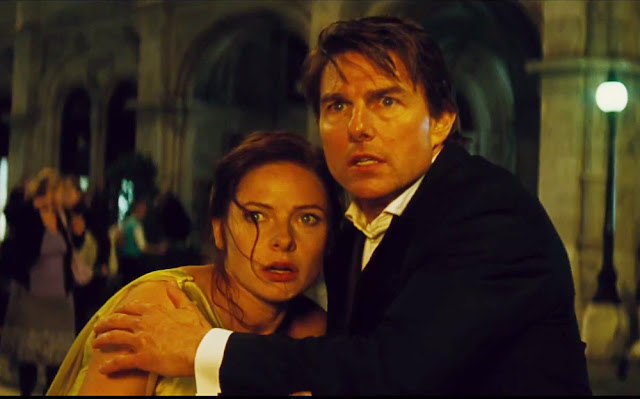 The Mission Impossible franchise has always set a gold standard on action sequences. It's go big or go home, and Rogue Nation satisfyingly exhausts that standard from the opening daredevil plane sequence to the closing foot chase through London. Ethan Hunt (Tom Cruise) and company travel to as many exotic locations as possible, to find an impossible to catch group known as The Syndicate, with the help of MI6 double agent Ilsa Faust (Rebecca Ferguson).

Mission Impossible as a knack for creating unorthodox action sequences. Rogue Nation is no different. Each sequence expertly mixes humor and tension to create a perfect scene. Cruise's age might be a downside to the franchise, but Cruise makes it work. During the most physical sequences, Cruise doesn't mind making fun of his age by making Hunt a tired old agent who can barely keep up with the younger kids. He falls over, loses his breath, and acts like a crazy old man.

Rogue Nation doesn't hold up against Ghost Protocol, but the film is much more enjoyable in the sense that the mission Hunt is embarking on is, for the most part, impossible. I know: Shocker! The film features Hunt failing multiple times, only to keep failing. Even at the end, Hunt only succeeds at the mission because the villain becomes annoyed and decides to show his face. The finale was the downside to the other extravagant parts of the film. At two and a half hours, the film still feels like it needs another thirty minutes to cover the story. Instead, the villain becomes arrogant and the film ends in an anti-climactic battle. Luckily, it's sprinkled with a bit of action to stay fresh.

Mission Impossible: Rogue Nation proves that the franchise isn't getting dull. Tom Cruise shows the audience that he might have one, or two, or five more films in him.

B+
Good Qualities: Action scenes are great, Tom Cruise is younger than ever.
Bad Qualities: The climax is rushed.

| 4:05 PM
Email ThisBlogThis!Share to TwitterShare to FacebookShare to Pinterest