Horrible Bosses 2 is a decent sequel. The film doesn't outshine the original, but the creators do try new concepts to create a fun, humorous adventure.

It takes guts to create a whole new story for a comedy. While The Hangover Part 2 and Dumb and Dumber To take the same story from the originals and try adding to it, Horrible Bosses 2 takes the basic concept while changing nearly everything else. There are a few plot points similar to the original, but it's only because of the characters' actions on needing to perfect their crime abilities.

For the second time around, we follow Nick (Jason Bateman), Kurt (Jason Sudeikis) and Dale (Charlie Day), as they try to get back at investor Burt Hanson (Christoph Waltz) by kidnapping his demented son, Rex (Chris Pine). Alongside the main trio, Jamie Foxx, Jennifer Aniston and Kevin Spacey also return. Each actor is as hilarious as they were in the first film. Waltz and Pine bring a huge breath of fresh air in what seems to be a rehash of the original film, but not as quite 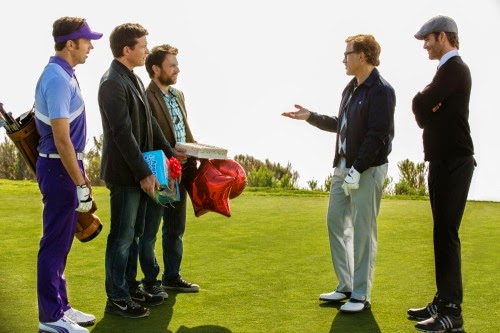 The film isn't a rehash like other sequel comedies that have appeared lately. While some of the plot points stay the same, like the recon sequences and car chases, much of what happens is extremely different and entertaining. This is the main risk that the film takes. Unfortunately, switching up the story can cause dilemmas.

Horrible Bosses was foolproof. Every scene was enjoyable and there was never a boring moment. Horrible Bosses 2 isn't this way. The film launches like a rocket and speeds to an exciting ending, but the middle is unsteady. The story seems to stop and the jokes become repetitive. Instead of fresh and funny the story takes a moment to shout out a dozen or so sexist jokes. It's sad because after these jokes, you still enjoy these characters and their dumbfounded actions.

| 10:54 AM
Email ThisBlogThis!Share to TwitterShare to FacebookShare to Pinterest