Just when you thought you've seen it all. Transformers: Age of Extinction is the epitome of film. It's hard to qualify this as a film. I would just say it's one large advertisement for Transformers toys and Bud Light, or a bunch of random robot battles mashed together. 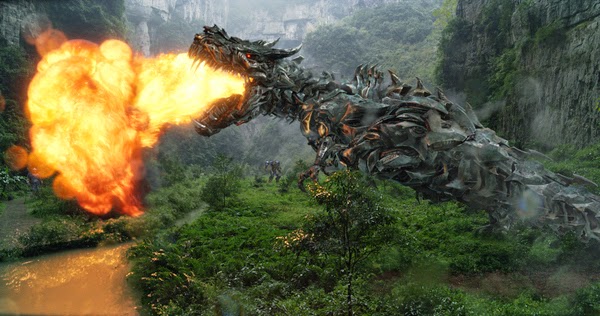 Transformers: Age of Extinction's plot is so bombastic to explain that it would be a waste of time. All you need to know is that there is a Transformer's artifact that can terraform the Earth and the Decepticons are trying to retrieve it. Other than that, there's a story revolving a father trying to bond with his daughter, scientists trying to destroy Autobots, and a lot of useless robot action. The robots are the center of attention in this very long, drawn out tale. While humans are around and help with the movement of the plot, they are also very cliched, like Michael Bay was trying really hard to see how cliched he can go. Mark Wahlberg plays a quirky inventor and father who's a bit too wary about his daughter's teenage years. Newbies Nicola Peltz, as Wahlberg's daughter, and Jack Reynor, as Peltz's secret boyfriend, are around for the blandest love story Bay has ever conceived for the big screen. The two are barely together onscreen and never show true affection towards one another. There are moments of father-daughter chemistry between Wahlberg and Peltz, but the chemistry lasts for a couple scenes near the beginning and quickly fades as the Autobots and Decepticons begin their battles with one another. The characters never jump past cliched and flat. Optimus Prime gets closer to being the Autobot every nerdboy has ever wanted to see on the big screen, but Michael Bay pushes for action scenes over character development.

The more astonishing feat is how Michael Bay has created a much more horrible film than his past three Transformers.  Each robot battle is the same, with you barely being able to focus on which robot is with which side. This time around, instead of Autobots fighting the normal Decepticons, the story's all twisted so that the Autobots have to fight humans who hunt them for their metal, a robot bounty hunter named Lockdown, and human created robots that eventually align with Decepticons. Dinobots finally enter the picture to become the most underwhelming part of Extinction. They are featured for ten minutes and have no personalities. The only reason Michael Bay introduces them is because the screenwriters write the Autobots and humans into a corner that needs a Deus Ex Machina to help them escape.

Michael Bay also does wonders with the product placements and toy advertising in this film. You think that Mudflap and Skids from Revenge of the Fallen were bad creations just to bring toys, you haven't seen Ken Watanabe's two sword wielding samurai Drift or any of the Dinobots. With product placement, Michael Bay has stopped caring on slightly integrating products into his films. Instead he blatantly places his products as close to the camera as possible. Besides the go-to car manufacturers, there is one scene where Bud Lights lay on the ground and Mark Wahlberg's character has a meltdown and starts shoving Bud Lights at the screen and randomly drinking one for no reason except for product placement.

The visual effects are still great as ever, but sore to the eyes when the robots begin to fight. You'll get bored easily, because you've already seen this three times. Fortunately, this is the worse it could get. A two and a half hour run time with ten sloppy plots, poor dialogue and mind numbing robot action. You a forced to watch robots sloppily fighting from one city to the next, cliched characters running around trying to save the human race when they themselves can't handle their own minor relationship issues, and a hundred plot points that center around humans creating their own robots for uses never satisfactorily explained.


| 9:43 PM
Email ThisBlogThis!Share to TwitterShare to FacebookShare to Pinterest