A poorly visualized story with an emphasis on American patriotism makes London Has Fallen the Donald Trump of film. 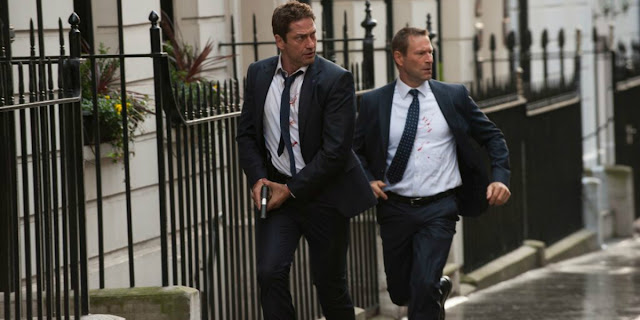 I went into this film looking forward to watching what I proclaimed to be the next "Die Hard" franchise. "Olympus Has Fallen" was a surprise hit. The visual effects weren't all too shabby either. However, somewhere along the line, there was a large shift in the direction the franchise was heading. You can't attack the White House over and over and expect audiences to keep coming back. "London Has Fallen" takes the franchise overseas to Britain and becomes the ultimate statement of America's whiny, narcissistic dominance over the world. A generalized Middle-Eastern terrorism group assassinates multiple country diplomats to get to the president. Of course, the president and his lead U.S. Secret Service Agent, Mike Banning, don't go out without a fight.

Out of every target the terrorists hit, the president and Banning are the easiest to kill, but the bad guys never win, because the good guys are American. The first attack happens in front of a church, in a wide open space, with around 20-30 random baddies. Then, there is the generic car chase and helicopter versus missile chase. Still, the terrorists lose, even when there are a hundred of them against two guys. America!

Gerard Butler's, Banning is the definition of post-9/11 America and of the film itself. He describes himself made of bad choices and bourbon. He is afraid of change, but at the same time having to face major changes within his life. And, he's all about swearing and bludgeoning his enemies with patriotism. Then, there is the whole not dying because he's American.  Every time Banning is about to be done with, he has to say something patriotic.

There are moments where the film looks to be less patriotic than it actually is. Britain's MI6 helps out every once in a while. However, even in the face of a hundred men, Britain soldier's fall by the dozen while Banning cuts and shoots his way to victory.

Car chases, helicopter chases, a large climactic battle. Lately, bigger is better, has never been good for film sequels. This is especially true for "London Has Fallen". Besides 90's style special effects and gimmicks like the first-person shooter style finale, the film uses most of its run-time panning from explosion to explosion, with very little story in between. "London Has Fallen" is an ethnocentric film. All about America, less about any other country.


| 4:38 PM
Email ThisBlogThis!Share to TwitterShare to FacebookShare to Pinterest