"The Hateful Eight" represents Quentin Tarantino's mind on overdrive, but many of the classic quips fail to capture interest. 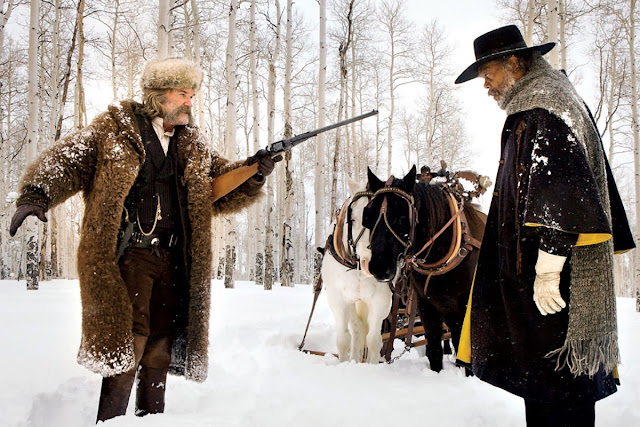 As of late, the Western genre has been reinvigorated by one person: Quentin Tarantino. Not saying the genre was dead on the ground. Throughout the decade there have been many (not many worth noting) films that captured the Western genre in all its essence. There have been the occasional big films like "3:10 to Yuma" and "A Million Ways to Die In the West", and then there were many more smaller fares (the absolutely breathtaking "Slow West"). But, Tarantino really brought back the fun of the genre. "Django Unchained" (2012) was the catalyst of this phenomena. Now, Westerns aren't only good again, but they are becoming few which is just as good. There is no need for a hundred shoddy films when we can do with a handful of great films. "The Hateful Eight" is Tarantino's ode to Westerns, but disappointing on the genre-end of the things.

Think half John Ford's "Stagecoach" and half Tarantino's "Reservoir Dogs" and you have the uneven mash-up of "The Hateful Eight." First half is strictly a talkie, with few interesting moments. Tarantino writes the story more harshly than any other film. His laid-back vibe has diminished. There is a lot more brutality in each of his words, no matter who speaks them. Even in comedic moments you don't know to laugh or to stay composed, because "The Hateful Eight" doesn't have simple funny moments like previous Tarantino films. It's the darkest comedy in Tarantino's library. There are scenes where the dialogue and characters do something that you can smirk at, but it's usually due to some degrading comment about some modern hot topic. Through this dialogue and through these characters, Tarantino brings out the worst in his audience.

The second half of the film is heavy on the classic shock-and-awe violence that we've come to expect from Tarantino. It's the expectation that is a let down. Blood paints the walls and rains on the ground. Brain chunks go flying, and by the end of the film everyone's face looks like a Jackson Pollock. But, there are no surprises. Tarantino has used up his last card on mixing tense dialogue with ferocious action. "The Hateful Eight" has three action scenes, all of which occur one after the other, near the end of the film. The first two hours of the film become a marathon for the viewer. The film feels more suitable for the stage than the screen. Heavy exposition and plot details chunk up screen time. When the third act arrives, it arrives with longing. Not to say "The Hateful Eight" doesn't have its moments. The cinematography is breathtaking and most of the main characters are well rounded. However, the story and dialogue flow as if this was a first draft of a grander project.

While films have been a main form of escapism for many people, Tarantino feels quite different. Tarantino makes you look at the world you live in. He doesn't show a distorted reality or a fantasy world. He shows the grim reality. Race only works together when fighting for a singular cause; women still get the short end of the stick; there is always talk but not much action until it is too late; there are always conspirators; and life is bloody and grim and no matter what the circumstances are, good or bad, you will die.


It would be fine for Tarantino to finish his career on "The Hateful Eight." The film feels like a bookend. Tarantino's voice is present in the form of a loudspeaker. The film is a best-of with all the Tarantino highlights being hit one after the other.  Nothing is upped and nothing is lost. Tarantino takes the genre he loves the most and scribbles his signature all over, creating some gorgeous scenes and some morbidly irritating moments.

| 10:04 AM
Email ThisBlogThis!Share to TwitterShare to FacebookShare to Pinterest