"Macbeth" is a visual delight with impeccable acting, but that Shakespearean dialogue still gets to you. 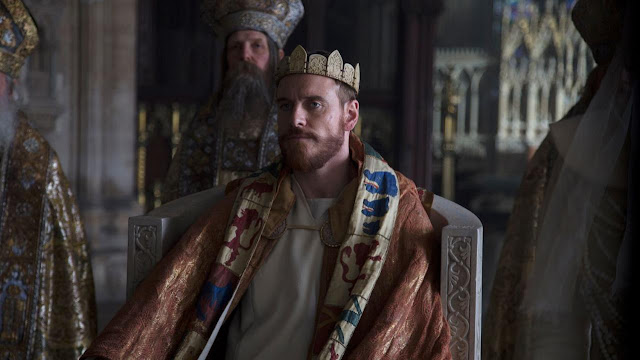 It's very hard to define Shakespeare in film. At one end, it's an actor's dream that gives them an opportunity to show their quality. At the other end, Shakespeare is a last resort for filmmakers. The screenplay is already created, the sets are simple, and the story appeals to every generation.

Michael Fassbender walks in Macbeth's shoes this time around, but there is no real need to prove Fassbender's acting capability. With "Macbeth" Fassbender keeps up his talent all too well. Fassbender has regularly played characters who give into paranoia and the darker sides of men. Instead of thinking that Fassbender becomes Macbeth, it's more proper to think that Macbeth has become Fassbender. While Fassbender throws himself at Macbeth, Marion Cotillard plays Lady Macbeth with a bit more mystery and grace. Macbeth is a puppet easily being controlled by all these forces around him. One of those forces being the gracious, but foul-minded Lady Macbeth. Unfortunately, character work isn't what the film focuses on, and Cotillard's highlight performance is dismissed for more visuals and dead-eyed stares from its lead.

"Macbeth" is a visual smorgasbord, from the opening slow-motion battle to the final duel set near a burning forest. Even the heavy dialogue scenes are placed in beautiful settings. Cinematographer, Adam Arkapaw creates visual perfection and works hard for "Macbeth" to be noticed by not just scholars and critics, but by a common audience. If any of Shakespeare's works-turned-films were ever to be distributed on a worldwide scale, this "Macbeth" would be a frontrunner. This is where the why-the-new-film comes to play. This film is not a last resort in filmmaking. This film is a remix built for a generation who cares less and less about originality unless it relates to some nostalgic feeling or popular subject. Macbeth and Shakespeare are the nostalgia and popularity that director Justin Kurzel brings to the table, while the brilliant visuals and standout performances drive the film's creative and brutal tone.

The only flaw comes from the substance of the film. There are few characters that matter in "Macbeth", and character development leads Fassbender's Macbeth to be a much hated character. From start to finish, Macbeth falls into a rabbit-hole of paranoia that leads him to commit several murders. Lady Macbeth uses coercion and deception. The heroes of the story are the ones who Macbeth is fighting against, and they are rarely given character. But, each do shine in expression and emotion. Director Kurzel doesn't work with the actors. Remember, this is a film that gives actors their chance to show what they are capable of. And, in a film culture where actors must imagine objects that won't show up until post-production, "Macbeth" helps its actors run free with emotion, even if the camera is focusing on Fassbender for the majority of the time.

| 1:30 PM
Email ThisBlogThis!Share to TwitterShare to FacebookShare to Pinterest