Dallas Buyers Club is a well crafted, intense, epic about one man's journey with AIDS. This film keeps you tuned in until the very end with a brilliant cast, screenplay and direction.

Dallas Buyers Club is based on the real life story of Ron Woodroof (McConaughey) and his struggle with the drug AZT, and the virus AIDS.

The whole cast is great, but Matthew McConaughey, as Woodroof, is amazing. As a homophobic, drug addicted rodeo cowboy McConaughey has literally transformed himself. Almost unrecognizable, McConaughey brings a great depth to a character who, at first, seems like a shallow son-of-a-bitch. Throughout the film, Woodroof's likeness for homosexuals grows, all with the help of a transsexual named Rayon (Leto). Jared Leto's Rayon steals the show every time she's on screen. Through the film it sometimes feels like a boxing match of acting between Leto and McConaughey. The acting energy they bring on screen is remarkable and contagious to the audience. Every time these two are happy, you're happy. When these two want to kill themselves, you just want to cry and give them both hugs. Both characters have quirks, flinches, and movements so well defined, it seems that McConaughey and Leto were meant to play these two roles. This is the best McConaughey role I've seen him in to date. He has been going against the grain of his type-cast, and it shows that he has been working hard at doing so. A second best performance by Jared Leto, with the first best being his role as Harry Goldfarb in Darren Aronofsky's Requiem for a Dream (2000). There is no doubt that these two will be nominated for an Academy Award for Best Actor and Best Supporting Actor. I wouldn't be surprised if they both won. 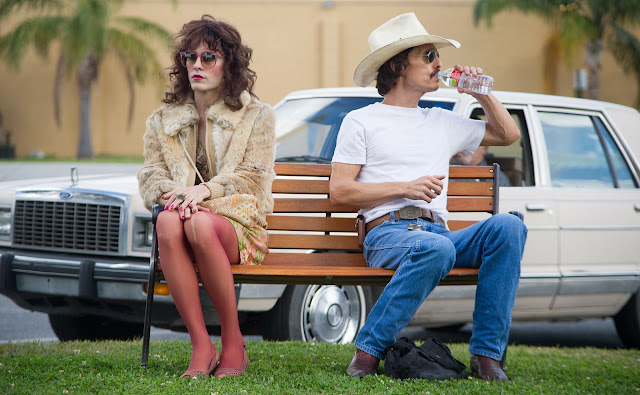 Starting before Woodroof learned he had AIDS, and going to the point where he had finally done something that made his life worth living, Dallas Buyers Club did not disappoint in story telling. Shots were quick with the longest shots being around 11 seconds and the shortest around 2-3 seconds. Sadly, these quick shots took away from the emotions of the audience. There would be scenes where a character would be at his weakest point and the tears would build in my eyes, but the scenes would change and those tears would be gone. Even at the end when you would want to stand up and cheer for the characters. I wouldn't have minded the story slowing down from time to time. With the story at fast pace the audience couldn't savor the delight or distress of the characters. There were never any slow points or points in the story where the film dragged. Every piece of dialogue was crisp and every scene had a distinct meaning for a character. The cinematography wasn't flashy or dull, it was real. There was no moment or action that threw me out of this film.

Jean-Marc Vallee creates a masterpiece in every way. McConaughey and Leto give the best performances of the year. Every one from the screenwriter to cinematographer bring amazement to the big screen. This is one of the best films of the year.