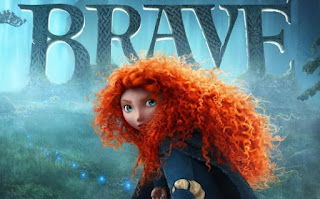 Pixar has been criticized for its lack of female protagonists. So, the studio challenged themselves to finally create a full on female protagonistic story. Yes, there are men in it, but they don't do much but show how vile and disgusting men can be. In my opinion, they can be vile and disgusting, but not this much. That is enough pre-discussion on the subject of this film.

The reason why this movie should not be Pixar's is because it is not Pixar's imagination. I feel like someone from Walt Disney Animation (probably a CEO) came into Pixar's studio and told them to make a Disney Princess film. Pixar reluctantly agreed to it.

Brave is about a Scottish princess, Merida who has teenage angst (and also doesn't want to be married at such a young age) so she decides to find a witch and curse her mother. Why her mother? Because her mother wants Merida to be perfect and marry and never have her sword at the table. The mother is just like every mother basically. The only difference between Merida and the teenagers today is that Merida has a real witch to go to.

The beginning of this story (first half hour) is great. You're introduced to the characters. You love everyone you meet, from the father to even the mother, because all of the characters you meet are archetypes of families today. The father is one of the greatest characters in this film. He steals the show - and the three brothers. 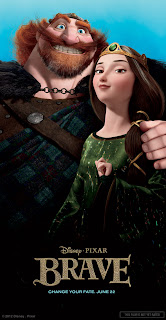 When the three tribes comes to the kingdom and compete for Merida's love, Merida PMS's and competes for her own hand in marriage by firing arrows at targets. In the rank of best archers ever, Merida is second (Legolas is first). She knows how to shoot and she can shoot almost to perfection. After she wins the competition, her mother accidently throws Merida's childhood bow into a fire and Merida runs away. Merida then comes upon a witch and wants a spell to be cast on her mother. The spell that she wants is so Merida's mother changes her mind about Merida marrying someone. The witch, on the other hand, loves bears and decides to change Merida's mother into a bear. This is where the story goes from being a great Pixar film to a film that any other animated studio could have produced.

First of all, the witch. She does not play a good witch. She plays a ditsy witch. The mother turns into a bear, but not a full on bear. The mother is a bear on the outside, but still the mother on the inside. I feel that at this point, the mother should have died and Merida would have had to go safe the kingdom from treachery, but no. I know Pixar, and they are not against killing characters off. They should have killed the mother. The mother as the bear made for some interesting jokes, but was too comical and almost over the top. It did not work at all. The villian and finale of this film was a bear fight and not even a good one. The bear fight in The Fox and the Hound was a thousand times better than this one would ever be.

Seriously, Pixar has run out of steam. Monsters University will be good, but won't be as great as the first. The Good Dinosaur has a great premise, but Pixar has raised the bar so high for themselves, that they will not be able to beat any of the past movies that they have made. Every film from here on out will be less than great and probably less than good.

D
| 4:25 PM
Email ThisBlogThis!Share to TwitterShare to FacebookShare to Pinterest