While Jurassic World dominates the worldwide box office, critics can't stop . . . well . . . criticizing the film for its portrayal of women. It's one thing when the film blatantly shows sexism at work, it's another thing when critics mistake bad filmmaking as sexism.

You can read the original review for Jurassic World here.


If you haven't read any articles related to sexism in Jurassic World, this Vulture article can provide you with some interesting insight.

The biggest and most annoying argument made on the matter of sexism in the film is the basic fact that Claire (Bryce Dallas Howard's character), decides not to take off, or cut off, her heels. While, I do agree her heels should've been thrown out at the first sign of her needing to run around everywhere, she didn't start running until she absolutely needed to.  And, when you absolutely need to run, nothing is going to stop you, not even heels. By this point, Claire and Owen Grady are searching for Claire's nephews and accidentally come upon the Indominus Rex. Claire doesn't really have a choice unless she wants to be eaten.

After that adrenaline high, I doubt Claire thought to herself, "It's about time I take off these shoes!" Around this time in the film, Claire is sitting in an armored truck with her nephews as raptors cause havoc around the park. More adrenaline to forget about those aching feet. I'm pretty sure that's the least of Claire's issues right now with her job on the line, people dying, and her nephews in danger.

Another argument made is that the filmmakers make a bad move introducing the nephews to Owen. The filmmakers don't make a poor move, but they could have handled the introduction a bit better. First, the nephews automatically identify Owen as their saving grace and decide that they want to stick with them instead of Claire, but that is not all bad. When Zach and Gray Mitchell see Owen for the first time, Owen rides to their rescue on a motorcycle, gets off, charges forward with a bunch of park security and begins taking out the flying dinosaurs. Yes, Claire gets a shot off with the dart gun, but Claire was also the one who ignored her nephews for the majority of the film. I'm glad that the filmmakers didn't take the easy route and decide all of a sudden for the kids and Claire to get together all happy happy joy joy.

If anything the film is rarely sexist toward Claire. Let us not forget that Claire is at the top of the food chain, metaphorically. She is the park's operations manager, which seems to be the top, only behind the park's new creator. She has the job that people would kill for. Her duties aren't always about going out walking into the park. Her duties entail talking to new sponsors, being in the control room, and looking at an attraction before it opens. The job requires her to wear formal clothes and keep up appearances. But, let us not forget the sub-par screenplay. Outside the little details that we know about her job, we can't assume that Claire stays like that everyday and every hour. Maybe Claire is a woman who enjoys to sleep in silk lingerie and look like a Victoria Secret model 24/7, or maybe Claire is a woman who gets home from a hard day at work, works out at the gym, lays on her couch in Hanes pajamas and eats a tub of ice cream. The day portrayed in the film focuses on Claire speaking to sponsors and checking out a new attraction, so it seems that she would need to be dressed form. 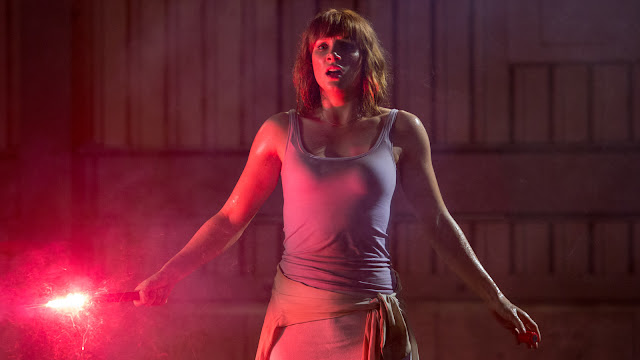 Another glaring fact that critics of the film seem to overlook is that Claire knows how to use a weapon. Vulture along with other critics who decided to look at the sexist aspects of the film spend about one sentence looking at the way Claire stumbles around with the dart gun while Owen is being attacked by a Pteronodon. If they had watched the scene, Claire doesn't stumble with the gun. She grabs it and takes out that dinosaur, possibly even killing it with the amount of tranquilizer darts she used, like a boss.

When the film's finale comes, gender roles are reversed. Owen isn't the one saving the day. Owen takes care of Zach and Gray while Claire, being the badass that she is, runs through an Indominus Rex and Velociraptor fight and toward the T-Rex paddock where she lures the T-Rex out and back towards the Indominus Rex. This is considerably the best moment of the film, and Claire is the one orchestrating it. Molly Fitzpatrick of Fusion writes about the scene:


"This is a genuinely heroic moment, swiftly undercut by the fact that she must then flee from the animal in her heels."

More heel criticism. Fitzpatrick paints herself into a corner by commenting that Claire is the heroine, but because of heels she is stripped of any heroism.  Fitzpatrick goes on stating that once Claire has her heroic moment, she goes back to being a "damsel in distress." Fitzpatrick compares Claire to Fay Wray in King Kong. It's a cute comparison, but I'm pretty sure Fay Wray did not unleash a T-Rex and cause a chain of events to happen so that the Indominus Rex would be defeated. Apparently, Claire had one little moment then went back into a state of helpless woman syndrome that seems to be plaguing this film.

Both Fusion and Vulture articles compare Claire's character to Laura Dern's character, Ellie Sattler, from the original Jurassic Park.  Comparing Claire to  Sattler is like apples to oranges, because the two are completely different personality types. Sattler is an archaeologist who spends most of her time in the field, working in the dirt. Claire is a high-powered operations manager who spends most of her time indoors watching things from a screen and learning corporate executives' names. 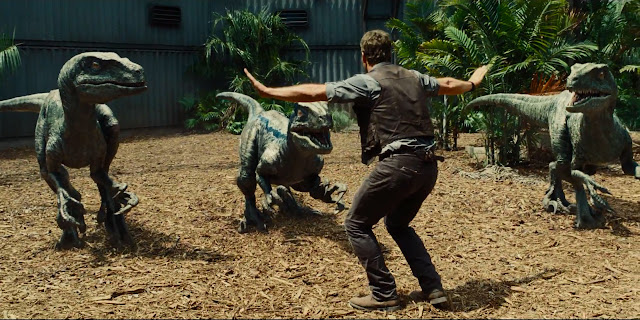 Owen Grady is a different story, in that he has some sexism locked away in his character, but to be criticizing the fact that there is sexism in the character, is ignorant. There is not a single human being on this Earth who isn't sexist in some way. Yelling out to the world that Owen Grady is sexist is saying that the sky is blue. Owen is an ex-military, velociraptor trainer who must be the alpha male in order to survive working around these ferocious creatures. Psychologically, it would make sense for his work mentality to bleed into his personal life.

Film critics have become vultures to this unappealing and regressive argument, because it has now become about the nitpicking of little issues in Jurassic World than the big picture. Claire is a heroine of Jurassic World, no matter how much you hate admitting it.

| 9:27 AM
Email ThisBlogThis!Share to TwitterShare to FacebookShare to Pinterest