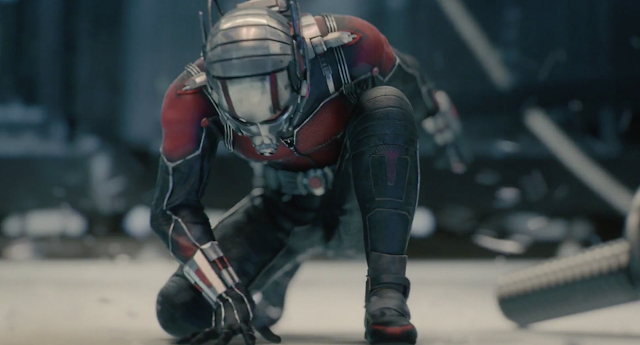 Ant-Man follows burglar Scott Lang (Paul Rudd) who's dealing with the problem every father is dealing with: wanting to show his daughter that he is a hero. To do this, he teams with Hank Pym (Michael Douglas), inventor of the Pym Particle and Ant-Man suit, and Hope van Dyne (Evangeline Lilly), Hank's daughter, to steal a shrinking suit created by Hank's former apprentice Darren Cross (Corey Stoll).

The great thing about Ant-Man is how tightly packed the story is. The film takes place in very few locations, the characters are the basic slate of Marvel archetypes, and the story doesn't try to be anything more than a straight forward Marvel-esque flick.  However, there becomes a point where the story begins to parallel that of Iron Man. The two major differences with this film are that Ant-Man features a lot more Avengers references and Ant-Man's main allies: ants. The parallel is really the entire story. An arrogant man decides to change his life after a traumatic event. Along with this life changing scenario, there is a villain who is looking to steal technology, an attractive female heroine, and a suit capable of doing something awesome. Ant-Man doesn't necessarily win over Iron Man in terms of story, character, or emotion, but does kick Marvel butt in visual effects. From Lang running around with ants to the stunning final battle, Marvel blows its audience away in effects. 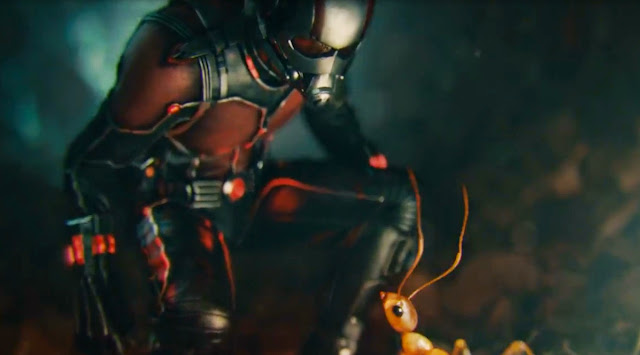 Before this Ant-Man was created, the film was in the hands of director Gareth Edwards. Edwards had opted out of making the film after Marvel was presumably forcing changes to the script. The changes to the script might be true, because this film is like two sides of a coin. The first side is a simple, yet intriguing redemption story aside from the Marvel Cinematic Universe. The second side is a shoehorned tale of Scott Lang getting recognized by the Avengers. Seems like Marvel can't help but reference other Marvel films every chance they get. The references create an uneven story and give cheap laughs to an audience who should expect more.

While Ant-Man is not the best weapon in Marvel's cinematic arsenal, it sure is the better pick of the year compared to Age of Ultron. The visual effects are stunning, the dialogue delivered is witty, and the story is compact and to the point. If only Marvel could change their formula once in a while.

| 7:12 PM
Email ThisBlogThis!Share to TwitterShare to FacebookShare to Pinterest