I never knew how clogged the summer movie season was with sequels, remakes, and reboots until I watched Tomorrowland. The film explores the realms of imagination and originality of film, but the message is lost within an embarrassing commentary about global warming, wars, poverty and obesity.

In the film, Tomorrowland is this magical, mystical place hidden somewhere between time and space, where only dreamers can come. It's the exaggerated utopia that Walt Disney always wanted. There are rocket jets, a futuristic version of the current monorail at Disneyland, Astro Orbitor-like spaceships, and a tiny Space Mountain in the background. This perfect world is soon ruined by Frank Walker (George Clooney), who creates a device that can predict the end of the world. Then, for some unknown reason, Tomorrowland isn't so happy and dreamy. Afterward, a young dreamer, Casey Newton (Britt Robertson), is coerced into believing in the false utopian reality of Tomorrowland. She has a huge imagination, but feels like she can't use it.  This would be called growing up in the wrong generation. Newton and Walker soon come together to try to get to Tomorrowland and stop the end of the world. It's a quirky adventure that usually has some type of amazing invention or feature that grabs a hold of the kid in you. 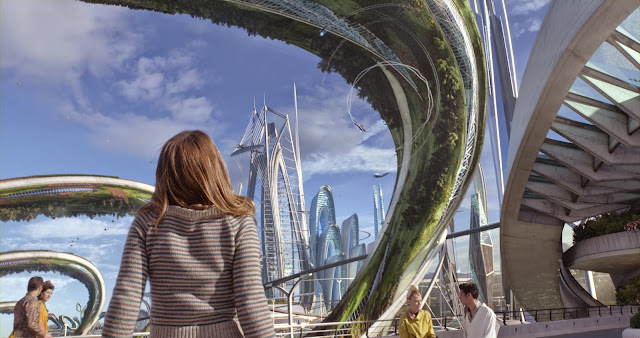 Tomorrowland is meant to inspire children, which it rightfully does. Children need hope that their generation will dream up something amazing. This is the heart of Tomorrowland. No generation wants to feel that they are done for and there are no more ideas left in the world. Director, Brad Bird decides to go an alternate route and speak of Earth's demise by . . . well, that is a bit unknown. The human condition is hinted at as being Earth's primary suspect, and so does every other volatile thing capable of destroying the world. That's where the film's biggest troubles stand. Tomorrowland creates an imaginative world and sometimes wastes the storytelling talent that is Bird and Disney, to bring a more environmental message that is safe and to the point.