What Could Make X-Men Days of Future Past Better?

After Wolverine saves the past, his future self wakes up in Xavier's School for Gifted Youngsters. The audience is reintroduced to all the characters they love, from Rogue to Cyclops. Everyone is back and everything is happy. That became a bit of a drag. Could we have left the future a mystery?

It would have been fitting for Bryan Singer to end the film in the past instead of in the future. Of course we want to know if Wolverine succeeded, but it felt that Singer was more focused on giving X-Men: Last Stand and Wolverine a big "F-you!" moment than giving true wonderment to the end of Days of Future Past.  There would be controversy over the ending, but there would also be a sense of inspiration and fan-boy enthusiasm.

Seems like no studio wants to take a risk on their properties nowadays. No one wants to kill off a character. DC did it with The Dark Knight trilogy, Marvel keeps doing it with their Cinematic Universe in every film they release, and now it seems that Fox has joined the party. I'm not speaking of Patrick Stewart's Xavier coming back. I'm talking about Wolverine and really every mutant who supposedly dies.

The film starts in the future where we watch some new X-Men faces die a terrible death. Colossus gets his head stomped on, Sunspot becomes engulfed in Sentinel flames, and Blink is cut up in the back. However, they all return two minutes later after Bishop changes the course of history by having Kitty Pryde send his consciousness back in time to warn the others. This happens once more, but towards the end of the film. This time, not just the future X-Men survive, but all the X-Men every fan boy has come to love from this film franchise. We see Cyclops, Jean Grey, Rogue, and Iceman, with the hinting knowledge that Wolverine's now lives in a world where mutants and humans can live in peace. But, this didn't bother me as much as one particular death did. 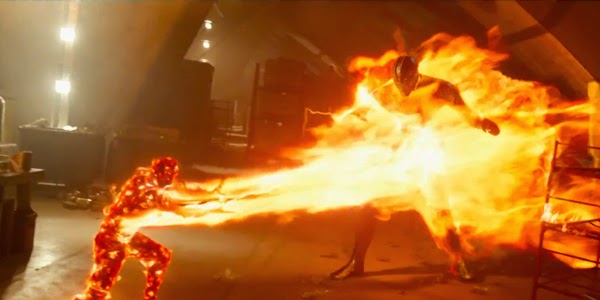 I call bullshit on the Wolverine drowning sequence. As the climax of the film comes, Magneto stabs Wolverine tons of times with metal rebar and throws him to the bottom of the Potomac River. Wolverine then drowns and dies. That's that, right? Wrong! Five minutes later, Mystique, disguised as William Stryker, rescues Wolverine from the river. All of a sudden, the rebar pops out and Wolverine starts to breath. I'm sorry, but drowning is drowning for anyone. Wolverine is dead. Let's just be picky here and say that at most, it would take four-five days for Mystique - dressed as William Stryke, with a military boat and subordinates - to find Wolverine and rescue him. It's not like this is a top priority with a stadium surrounding the White House and mutants almost killing the president. This film is dumbing its audience and telling us to believe that Wolverine has been down at the bottom of the river for the better half of a week and is still able to regenerate and survive. Just let him die already. Hugh Jackman is getting tired and old. He's already talking about hanging up his claws. This would have been a perfect time for him to be done with. Sure, there's another Wolverine film, but can't that be set before the 70's?

Because I'm a huge nerd and film fanatic, I already knew the end credits sequence would show Apocalypse. I just couldn't believe how dull the scene would be. For audience members who aren't familiar with the egotistical immortal mutant, there is no relevance for this scene. Even for fan boys, there's not much going on here. Apocalypse looks like Saoirse Ronan in a robe and we get a glimpse of the Four Horsemen.

Maybe, I'm just used to how well Disney/Marvel handle their mid-credits scenes that I was expecting a little more from Fox. The end credits scene doesn't make me look forward to X-Men: Apocalypse, it just makes me wish I saw Apocalypse doing something better with his time.

| 9:37 AM
Email ThisBlogThis!Share to TwitterShare to FacebookShare to Pinterest