What Could Make 'Atomic Blonde' Better?

"What Could Make this film Better" is an arrogant post that focuses on how featured blockbusters could be made better. What could make Atomic Blonde better? 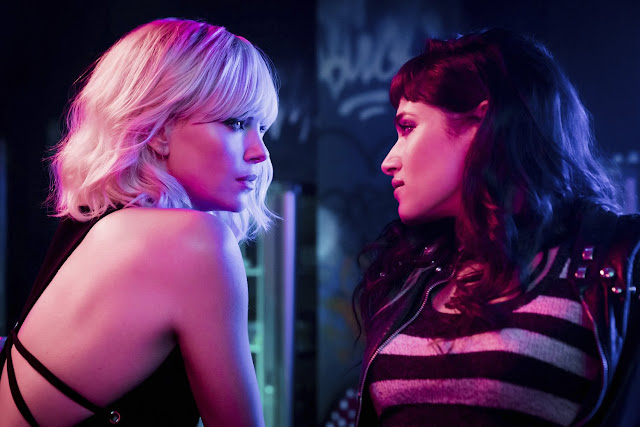 
Atomic Blonde is a flashback story. Charlize Theron's MI6 agent Lorraine Broughton talks to two higher-ups about the events that unfolded during her time in Berlin. The explanations she gives never really go anywhere. Blonde never tries at storytelling. It's quite noticeable that writer Kurt Johnstad doesn't do much to give the story life except add in an occasional fight or two. After leaving the movie theater you're wanting something more.

Make Broughton tell the story like Kevin Spacy's Verbal Kint in The Usual Suspects. Throw off the audience from the laughable ending. Use Broughton's words to twist and turn the film's narrative structure. Director David Leitch and writer Johnstad miss out on huge opportunities to bring much more of a thrilling mood to the film.

There's no classic ending when you discover that the main character was a triple-agent the whole time. Broughton is working for MI6, then it's learned that she's working for the Russian's, then at the very end she's actually working for the CIA. Complicated. Blonde doesn't make this seem like a crazy twist either. The scenes unfold hectically until you realize that it may have seemed like Theron didn't even know herself until last minute. She plays one type of character the entire film. Theron never shows herself to be playing the audience as a fool, and it's never shown in flashbacks either.

The perfect twist is when the audience has been given all the clues, but doesn't realize it. Blonde's ending can be seen a mile away. It's quite believable that Broughton is a double-agent working for the Russians. It's way less believable that she was a triple-agent the whole time. At this point the audience is just lost and the twist is forced.

3. Make It Great, Not Run-of-the-Mill


It may not seem like it, but Atomic Blonde is just like every other female action movie. She falls under the same pitfalls as well. Broughton gets beat up more than her male counterparts; like the female has to take a bigger beating in order to prove that she can hold her own. The fist fights in Blonde are 80 percent of Theron's Broughton getting her ass kicked and 20 percent her succeeding. There are dozens of better films that have females kicking ass (Colombiana, Underworld, The Heat, G.I. Jane, Salt). Heck, even Charlie's Angels has more female empowerment than Atomic Blonde.

Theron is great at action. The film definitely has some great moments, but Atomic Blonde should not get overly recognized as some grand pinnacle of female achievement. It's simply an okay film with a main character who happens to be female. Theron doesn't open the door to a new movement in film. She is just part of the noise of female action films. If anything, give praise to Pam Grier, Angelina Jolie, and Sigourney Weaver for getting that movement going in American cinema. If you look closely enough at Atomic Blonde you notice that the creators have to exploit every part of Theron for the film to sell (lesbian sex scene, Theron's naked body multiple times, proof that she can hold her own). Let's also make her an alcoholic just like Bond. That'll seal the deal. Former NBA champion and current columnist with The Hollywood Report, Kareem Abdul-Jabbar has a wonderful article on Hollywood's glamorization of binge-drinking in female led films. Hollywood needs to really look at creating female action films that don't all focus on drinking, sex, and nudity.