Knock Knock is a tedious endeavor. Eli Roth tries to come up with a clever horror story, but the film is neither clever nor scary, just frustrating to watch. 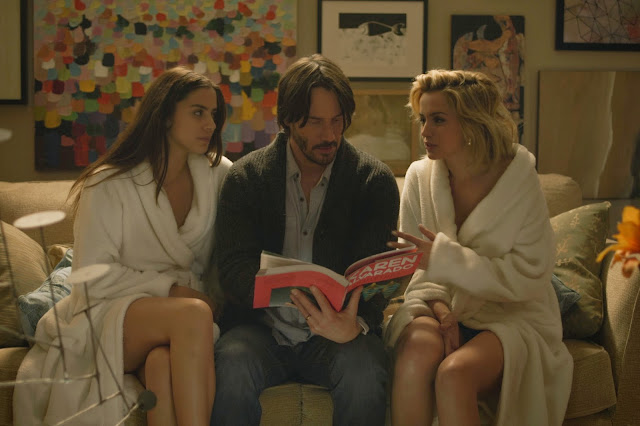 Keanu Reeves plays a father whose family leaves for the weekend. On a rainy night, he lets in two very attractive women (Lorenza Izzo and Ana de Armas) and stuff just happens. The ladies spend a good 30 minutes getting Reeves into bed, then another 20 minutes annoying Reeves in the morning. They then decide to torture Reeves because, well, infidelity.

Director/writer Eli Roth tries making a home invasion thriller for the social media generation, but doesn't include enough social media, thrills, or concrete story. Throughout most of the film, Reeves' biggest obstacle is to get to one of his phones or Ipads so he can call to get help. In reality it shouldn't be that hard. Izzo and Armas spend so much time paying attention to other things that Reeves should have easily escaped his captors. Instead, the story creates a warped timeline where it takes Reeves two hours to find a way to escape while Izzo and Armas are running around the other side of the house tearing up pictures and playing loud music.

Roth also tries for commentary about the state of music, state of art, the nuclear family, the decline of the Father's Day, and the sexual maturity of adolescence. Nothing sticks and the film becomes overcrowded. If anything, the film should be a commentary on architecture. There have been a fair share of horror films featuring maze-like houses with large windows and open spaces. If Roth wants to be the horror director of a new generation, why not set out to make a compelling story of home-invasion instead of another off-the-shelf cliche.