The Dark Knight Rises takesplace 8 years after The Dark Knight. The city has been in a state of police while Bruce Wayne lives in exile at Wayne Mansion, never to be heard of or seen. Once Selina Kyle and Bane come into the picture, it is good-bye to his exile and hello to his return as a weaker, less capable Batman.

In the true conflict of many problems, the beginning of this film has the bulk of them.  The Dark Knight Rises has so many new characters to uncover, so much backstory to tell, and not a lot of time to tell it in. It feels clunky at times and the story jumps without having a smooth transition scene. But, it doesn't matter at all, because every single character in this film is committed 101% to give the audience the best version of a Batman movie that there is.

However, Christopher Nolan believes that the audience should be with the story at all times, no matter the clunky beginning, because he doesn't treat the audience like children. He doesn't show us every single transition to the next big scene because it is an easy beginning to follow. I thought he did really well introducing new characters and a new Gotham in general. Many critics also said that there was less comedy than in the last two, but I find that there was just as much comedy; the darkness just outweighs it, and it is meant to.

The villain Bane was as monstrous as the evil that he was born in. And, he is great. Sure, sometimes you can't hear his voice through the mask, but his physicality and his use it makes up for everything else. Watching his eye movements, his body movements, and hearing the sheer evil that pours out of his mouth, you can only get a sense that if you ever met him he will not spare your life because you never had one. This is what he does as well. If Joker and Bane faught eachother in a game of wits and brawn, Bane would win, because Bane is evil that has never been brought on screen. There was a lot of talk about the comparison on Bane and Darth Vader. I see it, but Bane would kill Darth Vader before Vader could even pull out his lightsaber. Bane isn't careless, but he would kill his own mother just to watch her die. 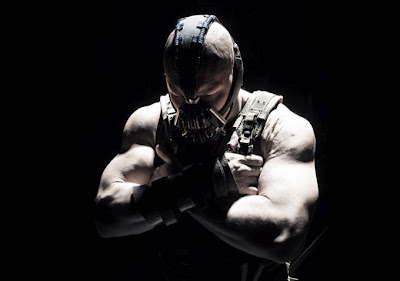 Selina Kyle on the otherhand has a mixed agenda in the film, that sometimes doesn't follow right. She gets in with the wrong people and eventually gets in with Bane and his people. I do have to say that Anne Hathaway plays an amazing Catwoman. You don't get a sense that the only thing she is trying to do is to rub up on Batman and play cat and mouse with villains. She is a human being with human problems. A person who was born into the wrong life and has dug a hole so deep that she commits crimes just to live. This is the best interpretation at Selina Kyle's Catwoman yet.

Other notables in a newcomer cast? There were a lot of new comers in this film, but another one that gave a tremendous performance was Joseph Gordon-Levitt. It seems that with every new film he plays in he becomes a better actor and this one is no exception. He plays at the top of his game. Another is Marion Cotillard who gives a great performance. She plays a board member of Wayne Enterprises determined to return Bruce Wayne to Gotham City.

One of the best actors in this entire film when he was on screen was Michael Caine as Alfred. He gave the best performance hands down, and if he doesn't win an Oscar or at least get nominated for one, then we all know the Academy is a joke. Michael Caine is the complete opposite of Christian Bale's Batman. Alfred wants Bruce to have nothing to do with Batman and goes to almost every length to stop Bruce from returning to crime.

Gary Oldman plays a great Commissioner Gordon as always. He is losing a battle with himself everyday and keeps speeches in his pocket that comment on the lie that was Harvey Dent. He keeps them, because he feels that he cannot lie anymore. The audience briefly hears about the aftermath of Jim Gordon's life after Harvey Dent died, and it is somewhat said indeed.

Morgan Freeman, Liam Neeson, Cillian Murphy, and every other person in this film is more than exceptional and play their parts like this will be the last part they ever play in a film.

Speaking of Bruce: as we know in the trailer, Bane knows who Batman is, and so does Selina Kyle. How is this? It is never explained in the movie, but the audience does get dialogue that pertains to how Bane knows, but not other characters. I can tell you that Selina and Bane aren't the only ones that know. Now as you also know in the trailers, Bane is part of the League of Shadows and has a backstory that doesn't really say where he comes from, but gives the audience of sense that Bane has emotions behind his mask. And the audience also learns that since Bane is part of the League of Shadows, he obviously knows all about Ra's Al Ghul teaching Bruce Wayne. Bane has many great lines during his revealing of being with the League of Shadows, including lines that Liam Neeson said in the original. But how does everyone else know about Bruce Wayne as Batman? Well, there are some eccentric stories all of which I kind of bought for the sake of enjoying the film.

Now for the spectacle and scope of this film. The scope is upped way more than the past two Batman films combined, but sometimes it feels like it stops short of itself. Yes, the plane jacking sequence is awesome, but it feels that it should have been longer. However, the Bane vs. Batman fight is at perfect length, and the finale is amazing. Throughout Bane's conquering of Gotham, the audience sees a lot and sees disaster of epic proportions. Nothing feels half-assed. Everything feels real.

I didn't want to talk much about the finale, but it seems like I can since parts were shown in the trailer. The finale was very packed with many things, some of which seemed irrellevant, via Morgan Freeman's scenes. And, even though it was emotional and thrilling, I felt it wasn't personal. The Batman vs. Bane fight number 2, doesn't last all too long and I felt that, that scene should have been the key scene, but it is not. However, at the end there are many twists and turns, and emotional moments where you can't believe that any of it actually happened.

This movie has made the best superhero trilogy in history because it ties up the Dark Knight's story and more importantly, Bruce Wayne's story. The emotions and stakes are at such extreme heights that you won't know what hit you until the very end and you'll be crying, laughing, and having such a mix of emotions that it will take you a while to calm yourself. Batman must rise or there will be nothing left. Bruce Wayne must go through trials and tribulations before he can truly discover what Batman stands for. It is a film that I would watch a hundred times over and over. It should be on your must see list of the year and you must see it now.

Christopher Nolan has given the fans and the people what we deserve and want. There will never be a greater comic book film trilogy and you can bet that Warner Bros. is thinking about not rebooting the bat, because there is no Batman after this. This trilogy is the definitive Batman and will always be. The film makes up for its clunky beginning by bringing the audience in to a world where the stakes are high and so are the emotions. You'll be on the edge of your sit until the very end.

A
| 10:06 AM
Email ThisBlogThis!Share to TwitterShare to FacebookShare to Pinterest